TRENTON – New Jersey Secretary of Agriculture Douglas H. Fisher today announced the United States Department of Agriculture’s National Veterinary Services Laboratory (NVSL) in Ames, Iowa has confirmed the finding of an exotic East Asian tick, also known as the longhorned tick or bush tick, on a farm in Hunterdon County on November 9. Initial identification was made by the Monmouth County Tick-borne Diseases Lab, located at Rutgers University and the Hunterdon County Division of Health. This tick is not known to be present in the U.S., although there are records of at least a dozen previous collections of this species in the country on animals and materials presented for entry at U.S. ports. 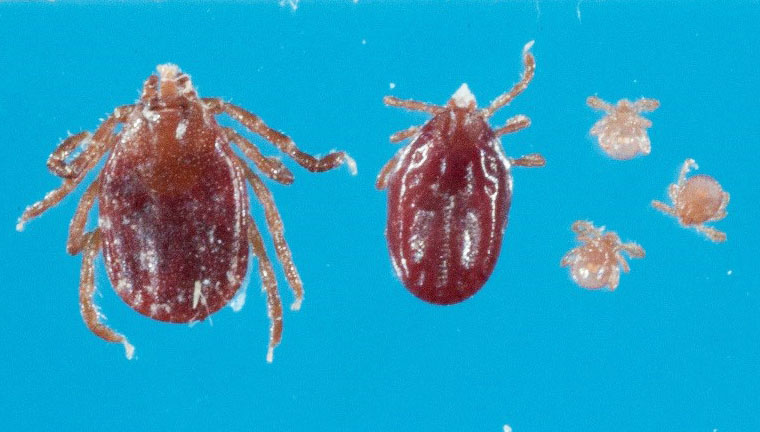 The species (see photo above) is dark brown in color and grows to the size of a pea when fully engorged. Both larval and nymphal stages are very small and difficult to observe with the naked eye. Adult ticks are seen mainly during early summer, larvae from late summer to early winter, and nymphs mainly in the spring.

This tick is a serious pest to livestock (including cattle, horses, farmed deer, sheep, and goats), particularly in New Zealand, as well as wildlife, pets, and humans. Farmers should monitor their livestock for the presence of this tick and decreased growth rates or signs of anemia in the animals. With respect to livestock, the tick is known to transmit a disease called Theileriosis to cattle, which results in severe anemia and possibly death. There are no human health or food safety risks associated with Theileria. This tick also has the potential to spread other bacterial and viral diseases to humans and other animals.

The animals and the property where the tick was found have been treated to eliminate the tick. To determine if the tick has spread to nearby wildlife, ongoing surveillance is being conducted by the NJ Division of Fish and Wildlife, Department of Environmental Protection (DEP) in cooperation with Wildlife Services from the United States Department of Agriculture, Animal and Plant Health Inspection Service (APHIS) and the Southeastern Cooperative Wildlife Disease Study at the University of Georgia.

The potential impact of this tick on tickborne illness in New Jersey residents is not yet known. In other parts of the world, the bush tick has been associated with several tickborne diseases, some of which are found in New Jersey, such as spotted fever rickettsioses. The Department of Agriculture is investigating if the ticks found locally are carrying any potential pathogens that may impact human or animal health.

Some tick species may become less active in the winter; however, it is important to take steps to prevent tick bites whenever you are in areas where ticks may be found. Protect yourself, your family and your pets from tick bites by:

State and federal animal health and wildlife officials are working to address these findings. Response efforts will include surveillance of the property and wildlife within the region. If necessary, tick treatments will be conducted to reduce the risks of spread. The primary goal is to eradicate the tick before it spreads to new areas.

Questions about livestock can be directed to your local veterinarian or the State Veterinarian at (609) 671-6400 during regular business hours.

This tick is a known pest in deer and has a wide host range, thus can infect a range of wildlife species. If the tick is detected in wildlife, then it should be immediately reported to the NJ Division of Fish and Wildlife, Bureau of Wildlife Management at (609) 984-6295 or the Office of Fish and Wildlife Health and Forensics at (908) 637-4173 ext. 120.

For questions about tickborne illness in humans, contact your local health department (http://localhealth.nj.gov) or the New Jersey Department of Health during normal business hours at 609-826-5964

Join us for the Winter 2022 Newsletter as we spotlight our newly elected RUBEA Co-Chairs; and learn about the Horse Management Seminar, Fact Sheet on Crabgrass Integration, and the over 36 years of service of #4H Agent Carol Ward. #RUESC #Rutgers #Horse

Join us for the Winter 2021 Newsletter as we highlight the upcoming Virtual Horse Management Seminar, our Fall 2020 Crowdfunding Campaign, and some other great stories. Go to: https://t.co/1IeLsDwX98 #EquineScienceQuarterly #RUESC #Rutgers #Horses #EquineScience

We are excited to launch our crowdfunding initiative for our EAAT for Veterans with PTSD research project on Veterans Day, the day in which we honor all veterans who have served our country. To Donate & Learn more go to: https://t.co/r7c4Fpo1bu #RUESC #Rutgers #Veterans #EAAT

Don't Forget, tonight is our first ever "Ask The Experts Live!" You still have time to register, so click here: https://t.co/l4bmSOpvoh #RUESC #Rutgers #Fall2020EWS #EquineScience #Horses

Join us next week as experts answer questions on equine health, pasture management, exercise physiology, manure management, and other topics. During this webinar, participants will have the chance to ask their equine-related questions. Register now: https://t.co/l4bmSOpvoh

Join us for the Fall 2020 Newsletter as we highlight our recent virtual events as we keep engaged with all of our equine enthusiasts, as well as some other great stories. Go to: https://t.co/hYnjOKkN92 #EquineScienceQuarterly #RUESC #Rutgers #Horses #EquineScience