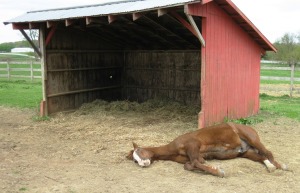 Even though I JUST recovered from my Thanksgiving feast, I am already gearing up for more holiday dinners and sweet treats! I’ve been taking advantage of this festive holiday season to eat all the little goodies I could swindle from my caretakers! They are always careful not to over-feed me, because that could lead to some serious health problems. When humans overeat they may need to spend a couple of days at the gym, but when horses overeat, it could be deadly!

Horses have small stomachs, and are meant to spend days eating grass at a slow, leisurely pace. If horses eat too much too fast, they could suffer from laminitis or founder – two related health problems that could be fatal! Laminitis is very painful, and can lead to founder. Founder occurs when the coffin bone (the bone in the foot) becomes detached from the hoof wall and sinks down because the laminae die. When a horse can’t move because of laminitis or founder, it can’t get to food or water, and it is in danger of other infection or disease.

You may be saying, “What does a horse’s feet have to do with its tummy?” Well, to make a long story short, if a horse eats too much grain too fast, the chemicals in its stomach get out of balance, making the population of good bacteria that live in the gut (yep – bacteria live in stomachs, and help horses and humans digest their food) very unhappy. Now, I’m skipping a few steps here, but eventually toxins build up in the blood because the gut and bacteria are all out of whack. These toxins accumulate in the feet and affect the highly sensitive laminae. Some of the work going on at the Equine Science Center is meant to better understand how the bacteria and microbes in the gut contribute to laminitis.

Another consequence of too much grain and not enough hay is colic. Colic is basically a big stomach ache, and happens because the food a horse has eaten becomes impacted, meaning it gets stuck. If this goes untreated, a horse could die. Not only is colic itself bad, but it could contribute to laminitis too!

As bad as all that sounds, laminitis, founder, and colic can all be prevented by a couple of really simple steps. First, make sure your horse’s diet is mostly hay or grass. Second, make sure your horse has access to plenty of clean, fresh water. Finally, only feed grain in small amounts spread out over several times a day – three times at the least; four times would be better. A horse needs to eat about 2-2.5 pounds of feed (including hay and grain) for every 100 pounds it weighs, so if a horse weighs 1000 pounds, it needs 20-25 pounds of forage and grain per day.

No more holiday feasts for me! I’m staying slim and trim and keeping my stomach and microbes happy!

Why You Shouldn't Look A Gift Horse in the Mouth...