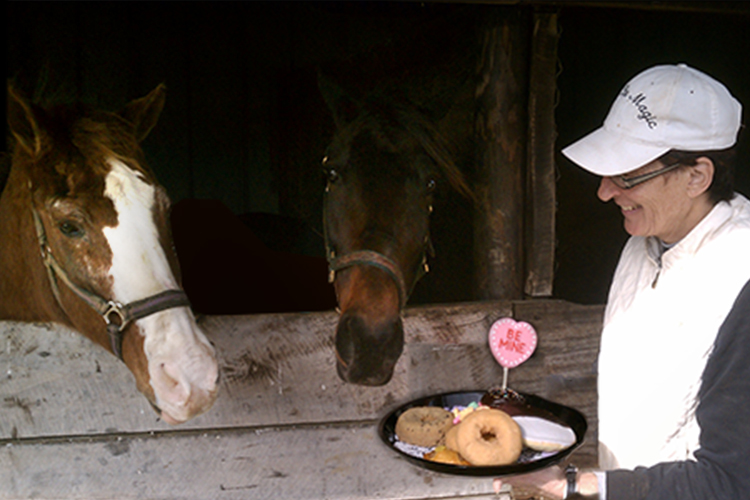 It’s that time of year again! Love is in the air! My gal-pal Christi and I have been enjoying the sunny bursts of warmer weather lately, but there is so much mud around from all that snow, I don’t think our coats will sparkle until summer! But that is OK because rolling in the dirt is way too fun, especially after a nice grooming. Hopefully the groundhog, Punxsutawney Phil, was right that spring will be early this year. I have a good feeling about it. I also have been getting very excited about Valentine’s Day! I was pleasantly surprised with a recent sweets-spread last week! Christie and I exchanged Whinny-Grams and then shared cupcakes, doughnuts, and cookies! It was a hay bale of fun. Valentine’s Day is so great because everyone realizes how much they appreciate each other, and I appreciate you, my partner in science, and my fan!

Recently, I received two letters from young girls asking big science questions. This was better than my Whinny-Gram because I love Equine Science 4 Kids so much! I was so excited to check the mailbox, read about what is going on and then help them understand what all of the information they looked up means. One filly, who is 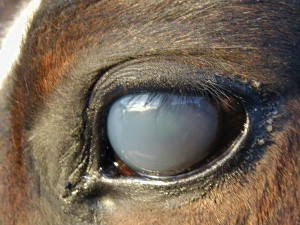 11, asked about Uveitis (you-vee-it is). She explained that all of the information she found was too confusing and she was hoping that I could explain it to her in clearer terms.

I told her that Uveitis is a condition when your horse friend’s eye becomes red, swollen, teary, and hazy blue. This happens when the horse’s iris (the colored part) becomes inflamed from a bang, infection or even its own immune system! The best step to take when you think your horse has Uveitis is to call your vet. He or she will confirm if your horse has it and then may give you some medicine to reduce the inflammation. In the meantime, try to limit the eye’s exposure to harsh light because this is irritating and painful for your friend. So far, scientists don’t know what causes Uveitis, but maybe you can figure it out someday!
Thank you for the question, my equine-loving pal!

The second question I received was from a 12 year old fan from New Jersey. She was interested in learning more about Cushing’s disease, so she could help her pony and also talk about it with others. Cushing’s disease is caused by an abnormal growth (a tumor) in the pituitary gland, which is located at the base of the brain. This causes a big hormone 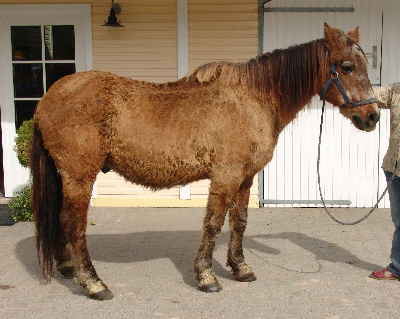 traffic jam in the body. First, the pituitary tumor causes an increase in the amount of adrenocorticotrophic (uh-dree-no-cort-ico-tro-fic) hormone (ACTH) released, which then triggers the adrenal gland (on the kidneys) to over-produce another hormone, cortisol. Too much cortisol makes the horse hyperglycemic – it has too much sugar in its blood! You might think that I have a lot of sugar from all the doughnuts that I eat, but this is A LOT more sugar than even that. A hyperglycemic horse can then become insulin resistant if there gets to be so much sugar backed up that it can’t process it all, and this leads to more problems. There are ways to make your horse more comfortable when they develop Cushing’s disease, but once they get it, unfortunately, there is no cure.

Thank you for the questions girls! You both made my Valentine’s Day on of the best I’ve had and I look forward to many more questions from my fans! Your questions were very interesting to answer, and I had a fun time checking in on the horsey professors at the Rutgers Equine Science Center for discussion on the topics, so we could give you the best answer possible. Maybe one day you will be doing research at the Equine Science Center too and you will be able to figure out the clues to curing and preventing diseases like these!

I hope each of you has a lovely Valentine’s Day 2013, and I look forward to talking with you again soon! If you have a comment, please write it in the box below, and if you have a Valentine ’s Day photo with your horse post it on our Facebook page! In the meantime, check out some other cool facts about horses on Equine Science 4 Kids!

Treat yourself and your horse this week!

Unexpected Visitors: A Blast from the Past!