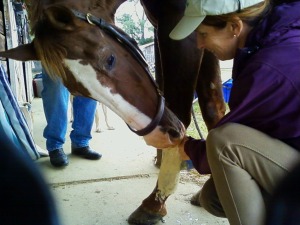 The extremely dry summer we had finally took its toll on me a few weeks ago; therefore, I haven’t been able to type with my hoof for a while. Let me tell you what happened…

Several weekends ago my owner arrived at the farm to notice that I wouldn’t move and had assumed a stretched out stance which looked like I was straining to urinate. He immediately thought I was colicking and ran into the pasture to offer assistance, but once he saw that I had just finished my large breakfast (like I would EVER miss a meal!), attention was drawn away from my belly to my left leg. I simply could not put my weight on it; it really hurt!

Since I had been running around with my paddock mate HugMeChristi the day before, everyone thought that I may have pulled a muscle or tendon. As a matter of fact, my leg was a little swollen near my superficial flexor tendon, which runs down the back of my leg and helps me flex my lower joints. I had to stand with my leg under a cold hose for 20 minutes followed by a leg wrap with a clay-like cream called poultice that absorbs heat and reduces swelling. 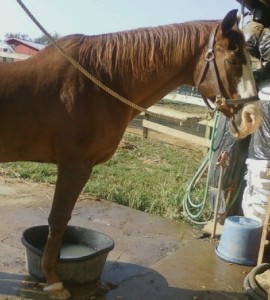 They also gave me some horse aspirin called phenylbutazone or “bute” for short, but the only way I would eat them was if they were ground into powder and mixed with grain so I couldn’t taste it. In fact, medicine might be the only thing I don’t like to eat!

Three days later I was still lame, so my owner decided it was time to call the veterinarian. My left leg was nerve blocked from the knee down to the pastern joint that way, if the problem was my superficial flexor tendon, I wouldn’t be able to feel it hurting me and I would walk soundly. However, I was still unsound even after they had made my leg numb, so the diagnosis was that the problem was in the hoof and that it was probably an abscess. An abscess can hurt pretty bad; it’s basically a buildup of pus meant to fight off infection in the hoof, but since hoof walls are hard and cannot expand to accommodate swelling, a large concentration of pressure forms which is eventually relieved by draining at the bottom or sometimes the top of the hoof. It’s almost like walking on a huge pimple, gross! For those of you who have ever had a corn or other foot problem, you know how painful sore feet can be. Maybe you’ve heard the old saying, “no foot, no horse,” well now I understand what it means!

To treat my abscess, I went through two weeks of hoof soaking for 30 minutes a day in salt water and my foot had to be poulticed and wrapped with a plastic bag and heavy duty duct tape to keep the poultice where it needed to be. After a few days of this routine “voila!” my caretaker found where the abscess would be surfacing and once it did, I was back and ready for action! Too much dryness of the hoof certainly contributed to my problem.
Now that fall is here my winter hair is starting to come in, and so are the tasty apples in the orchard down the trail! I can’t wait to go down there with my Equine Science 4 Kids shopping bag and pick some for myself…I think I deserve it after being so good while everyone took care of me!

Fun on the Farm!