What Is Lyme Disease?

Lyme disease is the most common vector-borne disease in the United States. Lyme disease is caused by the bacterium Borrelia burgdorferi and rarely, Borrelia mayonii, which is transmitted by the bite of infected ticks. On the east coast of the United States, the tick vector is Ixodes scapularis, whereas on the Pacific coast, Ixodes pacificus vectors the disease. The disease is transmitted to horses, humans, or other animals only through the bite of an infected tick.

What Is the Severity of Lyme Disease in the U.S.?

There are close to 30,000 human cases reported to the Centers for Disease Control (CDC) annually. Nonetheless, two different studies estimated that the number of human cases in the United States is around 300,000 per year. Lyme disease cases are typically concentrated in the Northeast and upper Midwest, with 14 states accounting for over 96% of cases reported to the CDC.

How Is Lyme Disease Spread?

In New Jersey, Lyme disease is spread by the bite of either nymphs or adults of Ixodes scapularis, also known as the deer tick or blacklegged tick. Nymphs are present from early spring until the early summer, while adults are generally found during the fall. Thus, spring and fall are the times that horses are at greatest risk of exposure to Lyme disease. Infected ticks transmit Lyme disease while feeding, and the risk of transmission increases over time. Typically, transmission from the tick to the host takes between 36 and 48 hours. Lyme disease is strictly a tick-borne disease, and there are no other natural routes for transmission. 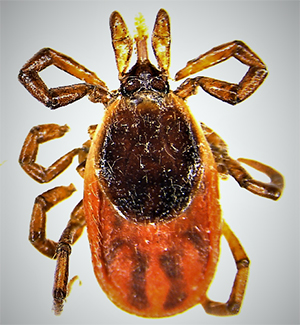 Figure 1: Dorsal view of an adult female of I.scapularis (Photo credit: A. Toledo).

Do All Ticks Transmit Lyme Disease?

No, only deer ticks (I. scapularis) can transmit Lyme disease in New Jersey. Other ticks in New Jersey bite and transmit other diseases to humans and animals.

What Are the Symptoms of Lyme Disease in Horses?

The range of specific clinical signs associated with Lyme disease in horses is not well established. The best documented syndromes associated with Lyme disease include neuroborreliosis, uveitis, and cutaneous pseudolymphoma. Other associations that are plausible but not well documented include stiffness, intermittent or shifting-limb lameness, poor performance, arthritis, fever, difficulty breathing, loss of appetite, fatigue/depression, and behavioral changes.

How Soon Do Symptoms Appear?

Most horses that are seropositive to B. burgdorferi never showed symptoms of Lyme disease or were so mild that they were not diagnosed. The best characterized signs of Lyme disease are neuroborreliosis and uveitis, which are compatible with late dissemination signs that in humans generally occur months to years after the initial infection.

Can I Have My Horse Tested for Lyme Disease?

If clinical signs correspond to Lyme disease, your veterinarian may do a quick in-house assay to check for antibodies against one of the B. burgdorferiproteins. However, this method does not quantify the number of antibodies the animal is producing. A more comprehensive test that can follow up the course of infection is available through Cornell University. The test is a two-step serological test that measures the presence of three different antigens by Enzyme Linked Immuno-sorbent Assay (ELISA) followed by a confirmatory Western blot or by immunofluorescence assays (IFA). This test can indicate whether your horse has been recently infected or is chronically infected.

What Is the Treatment for Lyme Disease in Horses?

Treatment for Lyme disease in horses is based on human treatments and single treatment trials in experimentally-infected ponies. In Lyme endemic areas, most practitioners treat horses with clinical signs and a confirmed serological antibody titer to B. burgdorferi with antibiotics like tetracyclines and β‐lactam drugs. Some practitioners, based on clinical trials in ponies, recommend a month‐long course of intravenous tetracycline or oxytetracycline. In contrast, others prescribe oral administrate of doxycycline or minocycline twice a day for at least 30 days. The use of β‐lactam drugs in horses is rare, in part because they have some toxicity risk and are expensive. However, again, if Lyme is suspected or if confirmed, it is best to work with your equine veterinarian to determine the best method of treatment and the proper dosage for your horse.

What Is the Prognosis for a Full Recovery of Horses Following Treatment for Lyme?

In contrast to humans, the course of infection and the symptoms associated with Lyme disease are not well established in horses. In principle, the prognosis for horses depends on the organs and tissues affected and the duration of the infection. The prognosis in horses for the most severe cases, including uveitis and neuroborreliosis, is poor.

In contrast, prognosis in seropositive horses with mild symptoms is good. The difference in prognosis is most likely due to the variability in the duration of the infection before the treatment. Commonly, horses remain seropositive for years after antibiotic treatment.

How Can Lyme Disease Be Prevented in Horses? And What Are the Best Tick Control Methods on Farms?

The most effective approach to prevent tick-borne diseases is to avoid tick bites. Every spring in New Jersey, regular announcements alert the public on the threats ticks pose to human health. Personal tick prevention measures include: avoiding wooded or brushy areas, walking in the center of trails, treating clothing and gear with EPA-registered repellents for ticks, wearing long pants and sleeves, using light clothing, and conducting a thorough tick body check after going outdoors. However, individual protection measures are not always possible for horses. Therefore, tick control measures on the farm are recommended to mitigate exposure of horses to ticks.

Tick management or “Tickscaping” creates a safe space within your property by modifying vegetation and creating a less suitable environment for ticks and their host. The goal is to create a hostile environment for ticks that also deters rodents and deer, which are the host for the immature and adult tick stages, respectively. Standard practices that help to achieve this include: 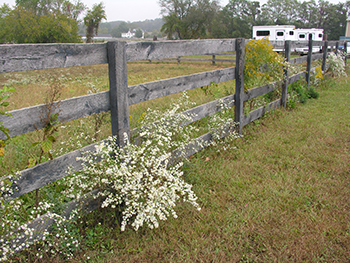 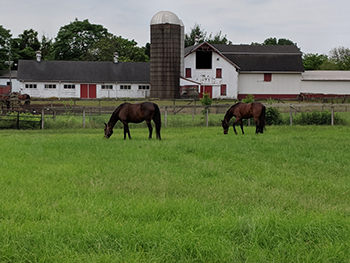 Figure 3: A well-maintained pasture will help keep the tick population down compared to a tall and overgrown one (Photo credit: C. Williams).

How Should a Tick Be Removed?

Ticks found on a horse should be removed as soon as possible using a plain set of fine-tipped tweezers. However, the horse must be properly restrained by an assistant for the safety of the person removing the tick.

What Other Tick-Borne Diseases Horses Can Get?

Anaplasmosis is another common disease that can be transmitted via ticks to horses (equine anaplasmosis), humans (human anaplasmosis), and other animals.  The causative organism, Anaplasma phagocytophilum, is a Gram-negative bacterium (formerly known as Ehrlichia equi, hence the persistent older disease name, equine ehrlichiosis), that deer ticks commonly transmit from small mammals like mice and rats. Horses usually show signs of the illness 10 to 45 days after infection. Common clinical signs include swollen limbs, fever, and small bleeds around the nose, mouth, eyes, and vulva.  Less common signs can include incoordination, muscle swelling, and colic symptoms. Treatment is similar to Lyme disease, and includes the use of tetracyclines (oxytetracycline, doxycycline, minocycline); however, it is generally shorter (7 days).

Equine piroplasmosis (EP) is a reportable (USDA) tick-borne disease that affects horses, donkeys, mules, and zebras. The disease is transmitted via tick bites or through parenteral transmission by improperly disinfected needles or surgical instruments. EP is caused by the parasites Babesia caballiand Theileria (formerly Babesia) equi.  The only known natural vector of EP in the United States is the tropical horse tick, Dermacentor nitens, found in the southern United States. EP is currently not considered endemic in the United States; however, isolated outbreaks of the disease have occurred infrequently (APHIS- Animal and Plant Health Inspection Service (PDF)). Horses can take 7 to 22 days to show signs of this disease which might include weakness and loss of appetite, most acute cases are not as common but include fever, anemia, jaundice mucous membranes, swollen abdomen, and labored breathing.  Other signs might include nervous disturbances, rough hair coat, colic, and hemoglobinuria (gives urine a red color) (APHIS).

We want to thank Sandy Strilec, DVM, New Jersey Department of Agriculture, Division of Animal Health, for the review of this fact sheet.

References and Other Resources