For a number of years Rutgers research has been directed toward control of the salt marsh greenhead in southern New Jersey. Now we can recommend a trap which will greatly reduce greenhead annoyance in many areas. Further research is planned to develop even better controls, which are effective and have no harmful side effects.

The salt marsh greenhead fly, Tabanus nigrovittatus, is an abundant and bothersome summertime pest along our coastal marshes. Because the females bite during daylight, and because they occur in large numbers, have a long flight range, and attack persistently, they interfere with the enjoyment of coastal areas throughout much of the summer.

To anyone who has not visited the New Jersey coastal areas during “fly season,” the impact of these flies on daytime activities is hard to imagine. We have collected in traps over 1000 greenhead flies per hour all seeking a blood meal. Greenhead fly populations reach peak numbers during July, but extend from late June into September.

Conventional methods of biting fly control, such as those used for mosquitoes are either environmentally undesirable or economically impractical. Both adults and larvae of greenhead flies are large in comparison to other, non-target organisms. Generally, more insecticide is needed to kill larger insects. The higher concentrations or greater amounts of toxic materials needed to obtain – greenhead control have undesirable effects on other insects and animals. Marsh water management by ditching may actually enhance greenhead production. Although high-level impoundments reduce the numbers of developing greenhead larvae, this is a costly and impractical approach to fly control for much of our coastal wetlands.

In studying the life history and habits of the salt marsh greenhead, we have developed several types of traps to capture greenheads in large numbers. These traps show promise as an inexpensive yet effective means of reducing the number of biting flies during midsummer.

Greenhead flies are produced from our coastal marshes. We have found as many as 70 larvae in a single square yard of marsh sod. Developing larvae concentrate along the upper vegetational zone reached by daily high tides. Foraging through wet thatch, surface muck, and vegetation, the predaceous larvae attack and devour a variety of invertebrates, including some of their own kind. Larvae overwinter and form a pupa after a brief period of spring foraging. The adult emerges from the pupa in late spring.

Adult flies mate on the open marsh. Within a few days and without seeking a blood meal, the female lays her first egg mass, consisting of 100 to 200 eggs. To produce additional egg masses, the female needs a blood meal. Among biting flies, blood serves as a rich protein source necessary for egg development. In the case of the salt marsh greenhead, protein for the first egg mass is obtained when the predaceous larva eats other insect larvae or small animals, but to lay additional egg masses she must obtain a blood meal.

Adult female greenheads move from the salt marsh to nearby -wooded or open areas along the marsh edge to seek suitable blood sources. There they await and attack wildlife, livestock, and people that venture close enough for them to detect.

Females live for three to four weeks in the uplands before they become too weak to bite. Because of this long life, larger numbers of’ blood hungry flies build up in areas near salt marshes. The physical removal of large numbers of flies can reduce this buildup and thus decrease the greenhead fly problem locally.

Traps were developed originally to measure fly populations during Rutgers research. In fact, the traps capture large numbers of blood-seeking flies and if such traps are located at the edge of a marsh or in adjacent uplands where flies concentrate, they serve as a partial control for greenheads.

After several years of refinement in trap design as well as the study of optimal trap location, we are confident that such traps will capture flies in numbers great enough to decrease the salt marsh greenhead problem in local areas. What we don’t know is whether or not the continual removal of large numbers of these flies over several seasons will reduce the size of the total fly population. To put the results of these studies to good use, we are encouraging all interested coastal dwellers to build and maintain one or more of these simple trapping devices.

The basic box trap design is diagrammed in Figure 1. Essentially the trap is a four-sided box having a screen top and open bottom. This box stands on legs so that its bottom is about 2 feet above the marsh surface. Flies enter the trap from below and move into secondary traps on the top of the box. The design is simple. The sides of the box can be made of a number of materials including plywood, cardboard, or plastic sheeting tacked to wooden framing. The trap dimensions have been developed experimentally and we urge the wise builder to pay strict attention to the following points: 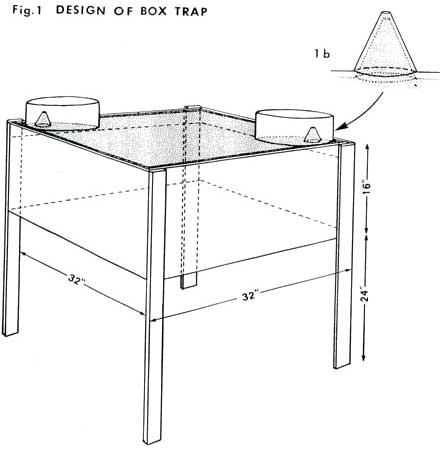 Box Trap Use and Maintenance

Traps should be set out when the first greenheads appear on the marsh (mid- to late June) and kept in operation through August. Generally, maintenance is a simple matter. Traps should be inspected at least weekly during the peak of the fly season. At each inspection dead flies should be emptied from the plastic containers and discarded, and tears or holes in the screens or sides should be patched or plugged. Trapped flies usually die in less than 24 hours and soon dry up and decompose. Traps perform best when the secondary collector is not clogged with flies, obscuring the light through the screen funnel. Thus frequent disposal of dead flies results in a more effective trap. Before storage, traps should be cleaned of flies and dirt. If stored indoors, they will last much longer.

Selection of trap location is important. Great variation in trapping success exists depending on location. The following suggestions will help you find the best location for your trap. Traps should be placed on the marsh edge near the upland or along the open edge of wooded or shrubby areas. The best locations are at breaks or openings of low vegetation in screening stands of trees or tall brush near the marsh. We call these breaks “fly-paths” because most of the fly traffic from marsh to upland passes through these points. Clusters of two or three traps in a fly-path tend to capture more flies then the combined totals of isolated traps. Traps can also be placed on beaches and should be located where flies are most abundant. If the beach is near the marsh, best results can be expected by trapping flies in the marsh and “fly-paths”.

Vegetation beneath and around the trap should be kept low (four to six inches high) for about a 6-foot radius. This box trap gives an ecologically safe, inexpensive, and effective means of greenhead fly control available to anyone with the energy and manual dexterity to build one. Why not try to build and operate one or more of these traps this summer. Remember, for every fly you trap, there is one less female fly to bite.