This fact sheet was originally authored in 1993 by Wayne Crans, now a Professor Emeritus of Entomology. It has been updated with the latest data on Eastern equine encephalitis transmission, including information to owners on how best to protect their horses.

Eastern equine encephalitis, commonly referred to as EEE (aka “Triple E”), is a deadly disease to horses as well as to humans. The agent of EEE is the eastern equine encephalitis virus (EEEV), an alphavirus in the Family Togaviridae, that is transmitted among wild birds (and in the southern U.S. also among reptiles) by mosquitoes. Mosquitoes also transmit the virus to horses and to humans.

Mosquitoes infected with EEEV are routinely detected in many U.S. states along the eastern seaboard, the Gulf Coast, and the northern Midwest. New Jersey represents a major focus for the infection with documented viral activity in birds, mosquitos, horses, and more rarely humans, every year and in several counties.

The virus responsible for EEE attacks the central nervous system of its host, and horses are particularly susceptible to the infection. Onset is abrupt and horse cases are almost always fatal. The American Association of Equine Practitioners (AAEP) reports mortality rates of “75–95% (usually within 2–3 days of onset of signs).” Symptoms include unsteadiness, erratic behavior, and a marked loss of coordination.

Although a vaccine is available (please refer below for more details), once an EEEV infection establishes, there is no effective treatment. Seizures resulting in death usually occur within 48–72 hours of an animal’s first indications of illness.

While EEE is not new to New Jersey, the disease is still poorly understood by the average horse owner. Furthermore, since 2003, cases of EEE in the northeastern United States have changed from intermittent/rare with less than 1 case per year to, on average, 4–5 human cases/year and 18 veterinary (mostly horses) cases/year, every year. A vaccine protective for horses is available, but a surprisingly high number of valuable animals go unvaccinated each year.

This fact sheet has been designed to answer the most commonly asked questions regarding EEE and its potential impact on New Jersey’s horse industry. For additional information on the subject, contact your County Agricultural Agent, your County Mosquito Control Agency, and your local equine veterinarian. In 2019 there were four human, eleven equine, one alpaca, and one deer EEE reported (NJ Department of Animal Health (PDF)). 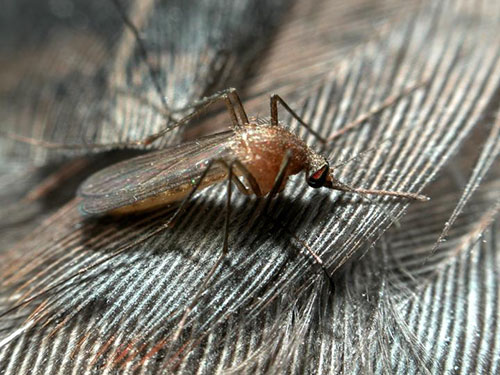 Where Does EEEV Come From?

The EEEV occurs naturally in a wide variety of wild birds. Blood analyses of southern New Jersey birds indicated that Blue Jay, Wood Thrush, Carolina Chickadee, and Gray Catbird all had high infection incidence levels (> 40%). But across the Eastern United States a large variety of songbirds show evidence of infection. The EEEV normally appears in local bird populations shortly after the nesting season is over in the spring. Bird-biting mosquitoes (specifically the mosquito Culiseta melanura) transmit the infection from bird to bird during the early summer months, and infections usually peak sometime in August. At that point, when mosquito populations are high, transfer from birds to horses and/or humans usually starts. In a typical outbreak year, horse cases begin to appear in August.

Does EEE Represent a Serious Health Threat to Humans?

Human cases of EEE are still rare, averaging less than 4/year across the northeastern United States, but are on the rise. Case in point, in 2019 there were four human cases of EEE in New Jersey alone.

Research indicates that most humans that are bit by EEEV-infected mosquitoes do not develop symptoms; in New Jersey it is estimated at one person developing symptoms for every 23 that are bit by EEEV-infected mosquitoes. However, children and the elderly are more likely to develop symptoms, and EEE is a very serious disease with a probability of recovery of less than 50%. The illness commonly begins with low fever, headache, and stiff neck. As the disease progresses, the patient can fall into a coma, with death as a likely outcome. Recovery is possible but individuals that do recover usually do so with brain damage. 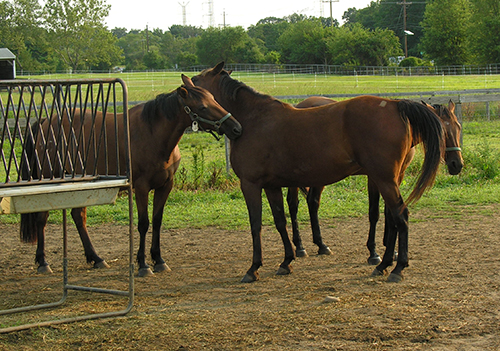 Figure 2. Transmission of EEE is not possible from horse to horse, or horse to human. Photo credit: C. Williams.

The virus that causes EEE cannot be passed from horses to humans by contact, body fluids, or any other physical mechanism. Therefore, a sick horse does not pose a health threat to its human owners. A sick horse is an indication that the local bird population is circulating the virus and that local mosquitoes are infected. Transmission is not possible from horse to horse, horse to human, or even horse to mosquito, since horses do not circulate sufficient virus in the blood stream to infect mosquitoes. Virtually the only way that EEEV can be acquired is via the bite of a mosquito that has fed upon an infected bird. 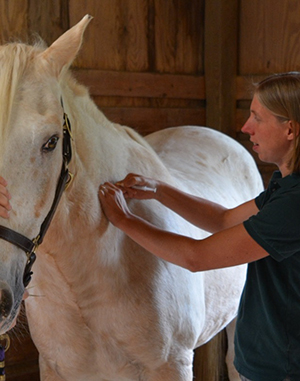 What is the Best Method of Protecting My Horse?

The EEEV prevalence was historically focal and highest in southern coastal New Jersey counties but has recently spread north. Professional vaccination is the only method available to protect horses from the disease. Vaccinations should be administered by a licensed veterinarian to assure that viable vaccine is utilized and injections are properly administered. Mistakes in vaccination protocol by well-meaning horse owners can result in ineffective protection in an animal that was thought to be risk-free. All too frequently, owner-vaccinated horses develop overt cases indicating that the animal was improperly vaccinated or was vaccinated with a vaccine that had lost its protective properties.

Properly administered vaccinations are effective for only one year. Thus, booster shots are required on an annual basis. Newly vaccinated animals require a two-shot series administered 2–4 weeks apart before protection can be guaranteed. Foals should be revaccinated during summer to ensure protection during the first year of life. It is recommended in the face of a fall epidemic, horses vaccinated in March should be boostered later in the season.

What is the Best Method of Protecting My Family If My Horse Contracts EEE?

Although human cases have never been associated with EEE, a sick horse is an indication that the virus is present in local mosquitoes. There is no human vaccine available for routine usage, thus mosquito avoidance is the best protection. You should strongly recommend that your family and employees use EPA-sanctioned insect repellents when exposure is unavoidable. Homeowners should also contact their county mosquito control agency and make them aware of the situation. To find your county agency see: nj.gov/dep/enforcement/pcp/bpo-mfagencies.htm. Mosquito control personnel are familiar with the EEEV cycle and if feasible will target known EEEV vectors, which are primarily freshwater wooded wetland mosquitoes.

What Should I Do If My Horse Develops Symptoms?

Suspect horse cases should be reported to your veterinarian as soon as possible. Your veterinarian will diagnose the infection and take blood or tissue samples for confirmation. Euthanasia may be necessary because the disease is fatal in unvaccinated animals. The veterinarian will probably request the brain since brain tissue is the only certain way to confirm the diagnosis. Some horse owners are reluctant to report suspect cases for fear of quarantine. There is no quarantine for EEE and nonreporting only postpones the mosquito control activities that could protect other horses on your farm and the immediate vicinity. The cycle of EEE is not yet completely understood. Quick reporting of a suspect case could provide valuable information for the future.

What Is Driving the Recent Increased Incidence of EEE?

Milder winters and wetter springs result in especially large mosquito populations and high infection rates in local birds. Furthermore, the primary EEEV vector in the Northeastern United States, Culiseta melanura (the black-tailed mosquito), lays eggs in underground water deep in forested swamps, which have proliferated with the reforestation of abandoned farms after the economy of the northeast shifted away from agriculture. Suburban developments near critical wetland mosquito habitat may also increase the public’s exposure to EEEV.

Thank you to Sandy Strilec, DVM, New Jersey Department of Agriculture, Division of Animal Health for the review of this fact sheet.